4th November 2009, Arctic Cranes Raptor 84 articulating tower cranes went into service with City Lifting. The advanced cab of the new crane was shown at Vertikle days in June 2009, between that time the structure ha been completed along with a full testing programme.

The 84 Arctic Crane Raptor is designed for working on congested city sites, the new crane features an out of service dimension of just four metres, a capacity of two tonnes at 32 metres radius or four tonnes at 21 metres.

The new crane took considerably longer to complete than anticipated but will be demonstrated to prospective customers at City Lifting’s Purfleet, Essex premises later this month. 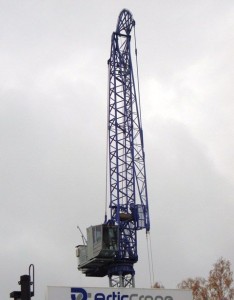 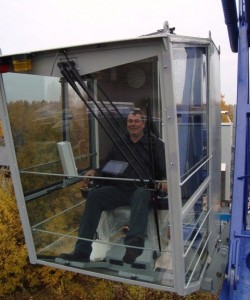 When preparing for the James bond film Casino Royale the producers contracted its long term crane suppliers,Lee lifting and us City Lifting which we provided a mobile and two tower cranes to go to the set in the Bahamas.

The two tower cranes which was sent to the Bahamas, were built with a heights differences of three metres. Provided the back drop for a series of  stunts including a classic Bond fight along the cranes Jib and a leap into the sea.

The contract lasted for 5 months with two City Lifting drivers Scott White and Jimmy Randall being selected for the plum assignment.

City lifting provided two Comansa LC5211 flat top cranes for the job. While Lee lifting sent its 100 tonne Grove GMK5100 to erect the tower cranes and carry out other lifting duties. Our two drivers Scott White and Jimmy Randall had to ‘black up’ each day asthe scene in which their cranes appeared is meant to be in Madagascar. 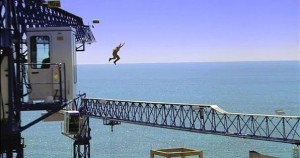 Where are the HSE/Osha inspectors? 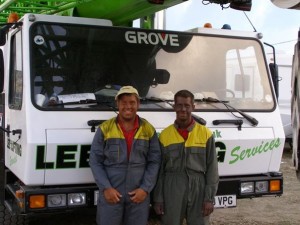 20th of January 2005 The first of the Terex Demag AC55 City cranes, which were ordered by UK crane hirers at Bauma last year have arrived at the Terex Demag facility in Upper Heyford and are currently being tested and prepared for delivery.

A unit destined for City lifting was being tested with the optional full reach of 60 metres, comprising the seven section 40 metre main booom, two stage extension plus six metre slide out extension.

Units are currently going through final inspection for Lee Lifting, City Lifting and Quigleys crane hire. The Quigley unit, the first of four, was closeted in the workshops where storage boxes and outrigger pad racks were being fitted.

The units were originally scheduled for delivery late last year but some minor design issues delayed the units until Christmas was looming, so they are now destined for delivery later this week and should soon be seen out and about on UK roads. 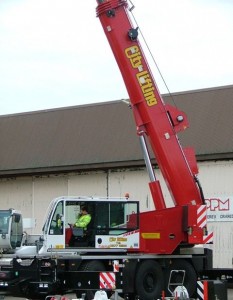 The New Two man cab is a big feature 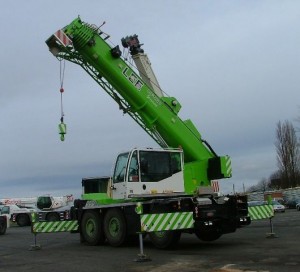 A Cold War missile travelled through the skies of London’s South Bank, assisted by the Grove GMK6300L all terrain crane lifting it to the Hayward Gallery on the 21st of May 2015.

The 6t decommissioned missile and launcher were installed on the Hayward Gallery terrace in central London, as part of the gallery’s Cold War history exhibition.

Our very own Grove GMK6300L, the six-axle crane, installed the 3.7t launcher followed by the 2.3t missile at a radius of 64m, in restricted space.

Trevor Jepson had this to say said: “The missile looked very impressive on its launcher when lit up at night on the South Bank — quite intimidating, pointing towards the City. The long reach and high capacity of the Grove GMK6300L makes it ideal for carrying valuable cargo in tight spaces in central London, and this is one of many jobs in the city where this crane has proven good performance and versatility.”

On the 16th May 2016 Citylifting Grove GMK6400 carries out a challenging lift in narrow streets of London, GMK6400 is one of the strongest mobile crane on six axles.

A project brief calling for a crane to lift a 7.5 t air conditioning unit, at a 69 m radius, on top of a 60 m high building, in one of the world’s busiest cities, would leave a lot of crane rental companies scratching their heads for the best option – but not City Lifting. Currently, the UK’s only owner of the 400 t capacity Grove GMK6400, the company knew immediately it had the best crane for the job. Several competitors who bid for the job had opted for a 750 t crane, asserting that the lift could not be achieved any other way. But City Lifting was able to complete the project swiftly and cost-effectively with its Grove GMK6400 –the crane even had 5 m of reach to spare. The GMK6400 is currently the strongest mobile crane on six axles.

Working in conjunction with a major building services company, the first challenge for City Lifting was rigging the crane for the lift. Placing a heavy crane with luffing jib and guyed boom configuration in the streets of London is challenging and complex to carry out.